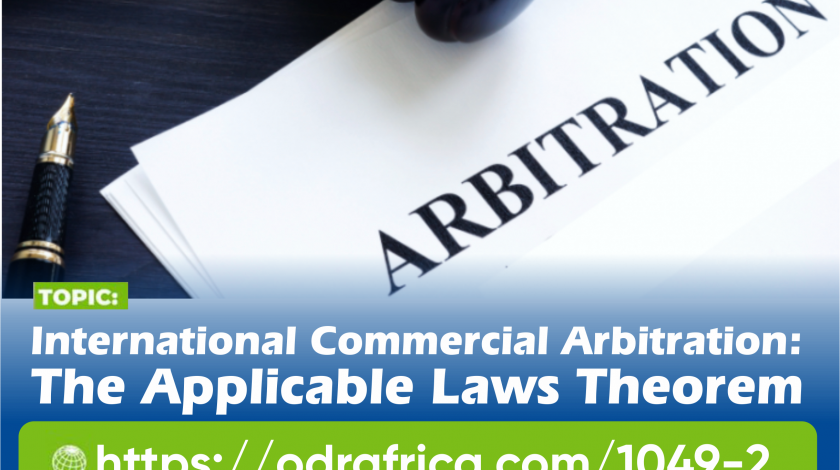 One of the most interesting aspects of international arbitration are the applicable laws. For me, what makes international arbitration stand out as its own system of law, much like the law of contract, torts, or criminal law, is the method employed to determine which laws apply and how they operate together in harmony, or at least sufficiently, to dispose of the dispute. Once that exercise has been completed, the process becomes, effectively, a form of litigation.

I always approach the issue as I would a problem. The first clue to that problem is invariably the arbitration agreement. This part is considered in many ways by commentators. As the foundation for the jurisdiction of the arbitral tribunal, the cornerstone of arbitration, party autonomy, or the mechanism for alternative dispute resolution.

Thinking about the arbitration agreement in these terms may be peculiar, but it is also helpful. It helps to understand the task of the parties, advocates and arbitrators once they find themselves in the void. This analogy may be easier to comprehend in the world of international arbitration because parties are naturally faced with a multiplicity of laws, where no particular system of law is dominant. In domestic arbitrations, this journey through the wormhole to the void can be missed or lost, more easily. However, if modern arbitration is the legacy of the lex mercatoria (merchant’s law),it is true that even domestic arbitration must logically amount to a rejection of the formal, judicial system of law in the domestic jurisdiction in question.

In my experience, no two arbitrations have ever been subject to the exact same set of laws and rules. This is perhaps one of the most notable and less patent characteristics of arbitration. This is in stark contrast to litigation, which is generally subject to the same substantive and procedural laws of a particular jurisdiction and, more often than not, a specific procedural set of rules which has been developed over many years and codified into available, published volumes.

If the arbitration agreement is the first clue to the problem, the lex arbitri (the law that governs the arbitration, and the arbitration procedure), tends to be the second. These two clues are often the most essential elements to resolving the problem of applicable laws. Where the rules of an arbitral institution are elected, that will form a third element. Other elements are normally contained within the terms of reference or similar instrument and the procedural orders and directions that follow.

The determination of the applicable procedural rules are arrived at by careful consideration of the essential elements and their order of precedence. This exercise is required, because unlike, as previously discussed in the case of litigation, all the applicable laws and rules were not created by a single jurisdiction, with the other law or rule in mind. So, for example, British parliamentarians were not considering the effect of the English Arbitration Act 1996, when used in conjunction with the Swiss Rules of International Arbitration. Nor was the United Nations Commission in International Trade Law considering how the Model Law 1985 would work with the laws of the state of New York.

It is an inherent element of international arbitration that conflicts between the applicable laws and rules arise, and practitioners and arbitrators must work together to achieve a workable resolution. How that is achieved will vary from one arbitration to the next. In my view, that is the system of law collectively regarded as international commercial arbitration.

The above proposition is supported by the fact that the application of Singaporean law, as the lex causae, does not automatically attract Singaporean law as the law that applies to legal privilege in those proceedings. Setting aside arguments as to whether legal privilege is substantive, procedural or both, the proposition holds true. Such matters become even more complicated, when dealing with civil law jurisdictions where legal privilege, strictly speaking, does not exist. The issue of privilege or any lawyer-client confidentiality right, akin to privilege, is unresolved in international arbitration, despite there being some common approaches to its practical application.

The proposition that the entire body of substantive law determined as the lex causae does not apply to the arbitration is not limited to the issue of privilege but can be similarly compared to issues of limitation, interest and costs. Controversies in respect of these issues may arise at different phases of any arbitration, or, in some cases, not at all.

Another ad hoc element is the lex fori. This refers to the laws of the jurisdiction of the seat of the arbitration. It is distinct from the lex arbitri, even though they are both determined by the seat. The lex fori, becomes relevant as the law which the state courts of the seat will have available to them in respect of supporting and supervising the arbitral process. These can have an impact in terms of whether, for example, anti-suit injunctions are available or defining the standard for the setting aside of awards. The latter being a distinct test from the grounds for setting aside, which will be contained in the lex arbitri.

Together with the elements mentioned above several other applicable laws may also be necessarily determined on an ad hoc basis. One example of this is the law of the domicile of the parties for determination of capacity of the parties, this is especially true for legal personalities where the laws of insolvency and arbitration intersect. Another example is the law that applies to the arbitration agreement to determine its validity or circumstances upon which it can be extended to non-signatories, and where the approach of various lex fori diverge. As a final example the law of the place or places of enforcement for obvious reasons , the arbitral award must be capable of enforcement.

It is apparent that a rich and varied legal framework may apply to a single arbitration, even without consideration of transnational or soft laws or rules. Some of these will be inherently essential for the purpose of resolving the disputes between the parties. Others may not arise in all arbitrations but will have to be addressed as they arise, on an ad hoc basis. Like any agreement, the arbitration agreement and the expressed or implied laws or rules that derive from it, are not capable of foreseeing and addressing all eventualities.

Arbitration practitioners must therefore remain alert and take great care in determining the applicable laws and rules for any primary, secondary, or procedural disputed issue that arises. The ad hoc issues trouble even the most seasoned of practitioners, as they tend to arise by way of a satellite dispute and expose a lacuna in the established legal framework for that arbitration. As party autonomy is the cornerstone of arbitration, there is no better resolution than agreement. However, in practice this is rarely the case, which leaves arbitrators with an invidious task of making determinations which inevitable leave at least one of the parties unhappy. The acid test is whether that determination can stand the ultimate test, review from the state courts of the seat or place of enforcement.