Future of ODR In Kenya

Future of ODR In Kenya 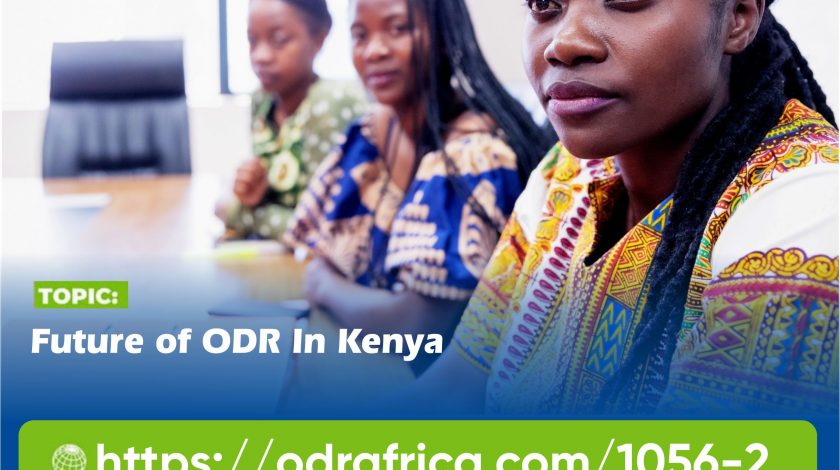 Mediation has a way of resolving disputes is as old as the human kind.

Kenya has about 42 tribes.  Each has its own way of resolving disputes. Given this large number of tribes, there are obviously a lot of tribal interactions, alliances, marriages, trade, and conflicts.  Some of these disputes are resolved through local tribunals, council of elders, chiefs, or local mediators.

Despite these differences, there is the universal underlying need for reconciliation, peaceful coexistence, trade and free flow of goods and services, among others.

Kenya’s population is about 54 million people.  Those below 35 years are 65%. This young population easily adapts to technology, is well informed about social media, and is also aware of the latest technological innovations.

Technology in a country like Kenya, and indeed, in developing countries is a process, a collection of skills and techniques. It is also a method used as means of production of goods and services. The aim of technology in these countries is also to improve the quality of life by making work easier, improving efficiency, reducing bureaucracy, and enabling faster delivery of goods and services.

Young people are mostly the early adopters of technology. Technology makes life convenient. Convenience all over the world has become not just a byproduct of technology, but a necessity.  “Necessity is the mother of invention,” the old adage says.

The second group that easily adapts to technology is the business community.  Kenya has a fast growing private sector. Currently, Kenya’s literacy rate is 81.5%.  This means that over 43 million people in Kenya, out of a population of 54 million, can read and write. These people also find technology to be convenient to use, easy to adopt, helps to make work easier, and would improve the quality of their life.

This means that the basic requirements for Online Dispute Resolution (ODR) are already there in Kenya.

Kenya’s economy is mostly cash based. This cash economy requires Kenyans to carry large sums of money because credit is not available to a majority of people. Carrying a lot of cash has some advantages but the dis-advantages outweighs the advantages. The banks, at first, made it very difficult for the local people to open savings accounts. It was even harder to open checking accounts. The banks also demanded that their customers leave large amounts of cash as security deposit in their accounts. Most people boycotted these banks and kept their cash. Moving money from place to place became dangerous and very inconvenient.

It was not getting better until the introduction of the cell phone. At first, only the very wealthy could afford to pay the prohibitive cell phone equipment and charges. After a while, the demand for cell phones shot up.  Smart business people saw the opportunity and took the challenge by increasing cell phone supply which led to competition, which brought the prices down. Most people acquired cell phones.  Cell phones were no longer a gadget of the wealthy. They became affordable, and a necessity.

Texting became another intrigue that the cell phone brought to the Kenyans. Previously the most common way to communicate was by mail. Mail was delivered by Kenya Posts and Telecommunications,  which had become an inefficient bureaucracy.  Mail delivery would take weeks, months, and mostly get lost in transit.  It became almost impossible to send money through the mail because it would never get to its intended destination. It was a crisis. This conflict had to be resolved.

Texting soon became the easiest and fastest way to communicate in Kenya.  This was just the beginning of greater things to come.  Kenya’s largest mobile phone company, Safaricom, got  an idea of using text messaging to send money online. The idea was not welcomed by many. Skeptics saw it as another way of opening doors to corruption, which is rampant in many sectors.  What saved the day and helped Kenya become a global leader in mobile banking and mobile money transfer are three factors;

The success of M-PESA in Kenya shows that the country is ready for ODR to take off. There are many internet providers.  The government has encouraged these providers to make it easy for the local population and businesses to acquire Wi-Fi connections.  Fiber-Optic cable is  laid in the country. There are over 5,000 kilometers of Fiber-Optic cable across Kenya. This will greatly boost internet connections.

Today, Kenyans can renew their driver licenses online, apply for their Personal Identification Number (PIN) online, and get it in real time.  Faster internet connections will also reduce the cost of communications and data transmissions in the country.

Kenya is ready for ODR because the infrastructure is already there. Rural electrification is a major government project.  Many villages and small towns have electricity or will be connected to the grid.   There is an informed population that wants to do business with the rest of the world..  What is needed is to identify stakeholders, those who will benefit from ODR such as business community, community leaders, policy makers, implementers, and the general  public.  Management of ODR as it relates to improving how tribal, commercial, local and international conflicts are resolved, will greatly improve how fast, effectively and efficiently, ODR is accepted, as another tool that will help Kenyans use technology to resolve their conflicts.