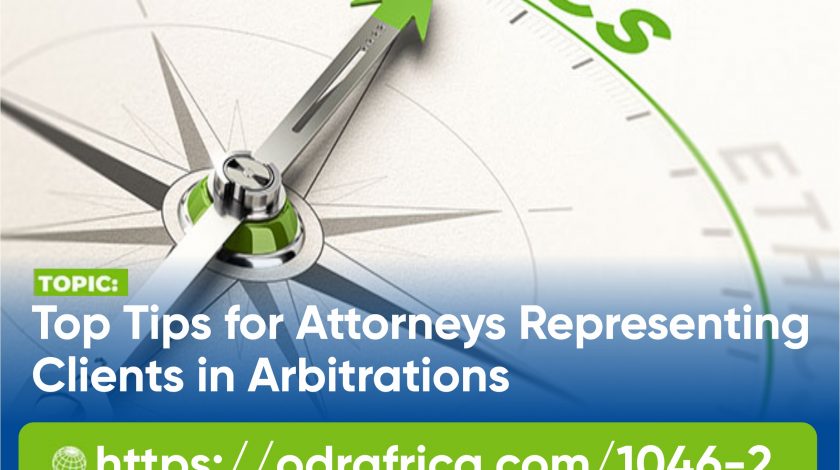 Planning and preparation are key components for any successful arbitration. Over the years, as a former litigator and current arbitrator, I have gleaned a number of lessons and tips that I believe will help any attorney who is representing a client in an arbitration. Below are my top tips.

Vet and select the arbitrators carefully. One of the great benefits of private arbitration over judicial forums is that the parties can choose their arbitrator(s). In many cases, the parties will agree that each party will name one arbitrator, and then those two arbitrators will choose a third to act as chair. In other cases, the parties are provided with a list of neutrals who can serve as the sole arbitrator or on a panel of three arbitrators. Under prevailing ethics standards, arbitrators, once appointed, serve strictly as neutrals and may have no ex parte communications with any arbitrator. However, unless the parties’ arbitration agreement provides otherwise, nothing prohibits a party from interviewing prospective arbitrators in order to understand their background and their approach to hearing cases, and to determine if they are a suitable candidate for the particular dispute. Counsel should take full advantage of the opportunity to pick their arbitrator(s) by carefully vetting backgrounds and talking with the candidate(s). Counsel should refrain from providing an excessive amount of information and should not discuss the merits of the case nor, of course, ask a candidate how the person might rule on any particular issue. While it is not inappropriate to ask a prospective arbitrator for references, many will decline to provide them, as this might suggest that arbitrators make decisions based on assuring they receive favorable notices from counsel or have somehow favored that reference when such is not the case.

Plan diligently for the preliminary conference with the arbitrators. The arbitrator(s) can be expected to schedule an initial conference with counsel to discuss the background of the dispute and to have them answer detailed questions about the conduct of the case from start to final award. This is typically done through a preliminary conference checklist that is distributed by the arbitrators and will guide the discussions during the conference. The arbitrators will ask counsel to confer in responding to these questions and will ask them to provide their agreements and, if necessary, their disagreements prior to the conference. This is the first opportunity for the arbitrators to get a feel for counsel; thus, it is important for counsel to be well prepared and exhibit a cordial approach to both opposing counsel and the panel. Civility matters to arbitrators.

Manage discovery efficiently. The parties should recognize that there are significant differences between private arbitration and federal or state court litigation. Among the important differences is that discovery is generally more circumscribed in arbitration and there are often limitations on the number of discovery requests and depositions, either by agreement of the parties, the rules of the organization managing the arbitration or rulings from the arbitration panel. Accordingly, the parties must be very focused on what discovery is essential to presenting their individual cases. Counsel should confer on any discovery disputes and try to avoid arguing over these disputes with the arbitrators, as this can lead to delays and add to the expense of the proceeding.

Consider whether pre-hearing motions are necessary and would be productive. Understand whether your panel is inclined to allow robust motions practice or frowns upon it. This will typically depend on the complexity and nuances of the dispute and what the parties’ arbitration agreement provides and the applicable rules permit. Every panel is different, but some panels disfavor motions because they believe it is important to let the parties have free rein when presenting their evidence at the hearing since appeals of the final award are so limited, as discussed below. To the degree motions are allowed and filed, most arbitrators are experienced both in their role as neutrals and as former litigators; they are able to see through arguments that are not germane to the dispute. Focusing on such arguments diminishes the quality of a party’s overall position. Spending time arguing about extraneous issues is counterproductive and should be avoided.

Conduct the case cooperatively. Although arbitrators are hired to rule on disputes, they very much expect the parties to confer and try to resolve their procedural disagreements. Arbitrators do not like unnecessary posturing and finger-pointing, and if counsel becomes obstreperous, this will damage their credibility. In particular, using inflammatory language in oral or written presentations will not endear counsel to the arbitrators.

Be very careful in completing pre-hearing preparation. Prior to the hearing, the panel will typically convene a conference with counsel to prepare for the presentation of testimony. This conference will discuss how to prepare witness lists and brief summaries of the scope of each witness’s testimony; the need for pre-hearing summonses; the exchange of documents to be introduced into evidence and management of exhibits (the panel will want the parties to prepare joint exhibits to avoid duplicative presentations of key documents and will want all exhibits provided in separate indexed and tabbed binders); how to handle potential objections; the need for summary legal briefs highlighting the parties’ final positions on the outstanding critical legal, factual and potential remedial issues in the case; any needs for particular technologies to be utilized by a party or special arrangements for a witness’s participation; and related issues. Counsel should confer about such matters prior to the conference and try to reach agreement on as many of these subjects as possible.

Choose your hearing evidence and witnesses skillfully. Arbitrators typically do not apply the Federal Rules of Evidence. Often the parties’ agreement or the applicable rules so provide. Where they are silent, the parties will normally accept the guidance of the arbitrators. Many arbitrators prefer not to apply the FRE. As such, arbitrators generally allow all evidence that is relevant and non-duplicative and will give such evidence the weight they feel it deserves. In presenting their witnesses, counsel should follow the same best practices as set forth above relative to how to present any motions. In short, while zealously representing your client, stick to only what is important, and avoid arguing extraneous points. Avoid being hostile toward your opponent or the panel itself. Such behavior is not conducive to the panel finding in your favor.

Plan post-hearing activities. At the conclusion of the hearing, arbitrators typically prefer not to hear final argument at that time. They will decide whether they want post-hearing briefs and set timelines and page limits for same. Briefing is usually due a certain number of days after the parties receive a transcript of the hearing. (In almost all cases, arbitrators will require a transcript.) Once the briefs are filed, the arbitrators will decide whether they believe final oral argument is needed before they are comfortable rendering their decision. The parties may request argument, and usually their request will be granted, but the ultimate determination remains the prerogative of the arbitrators. After oral argument, the arbitrators will usually determine if they then have all the information they need to render their final award, at which point they will notify the parties that the record has been closed in the case and any timelines for the delivery of their award will commence from that date. By the end of the hearing, counsel should have a very good idea of what the arbitrators are focused on and what they have little interest in; thus, their briefs and oral arguments should focus on the critical evidence and legal issues, and not wander into irrelevant territory.

Decide on the type of final award you desire. Most arbitration agreements provide for the type of award the parties desire. Where this is not the case, panels will ask the parties what they want, whether a bare or reasoned award. There are options in appropriate cases for the parties to voluntarily agree to an award that restricts the flexibility of the arbitrators. One example is what is known as a baseball award, where each party provides its best and final offer and the parties ask the arbitrators to choose one of the two. There are permutations of this approach; for example, the parties can do a blind baseball award, in which they provide the arbitrators in sealed form their final positions and the panel’s award is made without reference to the sealed offers and is final if it hits one of the party’s positions or falls within their offers. In the event the award falls outside the parties’ positions, it would be conformed to the closer of the parties’ positions. These approaches give the parties the most flexibility in controlling the outcome of the case, although they require sophisticated analyses to assure they are being reasonable in presenting their offers. Arbitrators have many different styles in rendering final awards; some are very succinct, while others can write extraordinarily long and heavily annotated decisions.

Appreciate the limitations on appealing final awards. The parties must remain cognizant that while final awards are enforceable in court, they are very difficult to overturn in most state and federal courts due to the standards that have developed over the years in appellate settings (and where relevant under the Federal Arbitration Act) that provide great deference to the rulings of arbitrators. While the standards differ from jurisdiction to jurisdiction, there are many cases where the courts have disagreed with an arbitral award, or even found legal error, but nonetheless declined to overturn the award so long as they find it to be reasoned (if wrong) and absent of fraud, bias or other disqualifying behavior by the parties, counsel or the panel.

Arbitration can be an excellent format for privately resolving disputes. It can be efficient if the parties commit to it. It is best managed by paying close attention to the differences between private dispute resolution and the much more comprehensive rules and practices that govern judicial dispute resolution, and by observing some of the tips discussed here.

Harold Himmelman has practiced law since 1967 and is an experienced litigator, mediator and arbitrator. He has served as a neutral for over 25 years both with JAMS and as a senior mediator with the U.S. District Court and U.S. Court of Appeals for the District of Columbia. He has successfully mediated and arbitrated hundreds of complex cases. He has served as a member or chair of many arbitration panels. Prior to his focus on ADR, Mr. Himmelman successfully litigated many cases in private practice on behalf of international and U.S. companies in complex litigation over intellectual property rights that were resolved through private arbitration.

2022-08-03
Previous Post: The Impending Battle for the Soul of Online Dispute Resolution
Next Post: Musings of Metaverse Arbitration